As part of this year's Jahnturnfest, the Friedrich-Ludwig-Jahn-Gesellschaft e.V., in cooperation with the Freyburg parish office as well as the Berlin church music director and organist of the Marienkirche in Berlin, Kilian Nauhaus, and the world-renowned gambist and Echo-Klassik prize winner, Thomas Fritzsch, will host a musical lecture evening entitled:

"He did right and spared no one" -Jahn's godson Franz Ludwig Meffert and his family.

Friedrich Ludwig Jahn's friends from his Kolberg days in the early 1820s included the master craftsman Ferdinand Meffert and his wife Emilie. In 1835, Jahn became godfather to their second child, son Franz Ludwig. Jahn's letters to the Meffert family, most of which have survived, are an important source for Jahn research today.

Franz Meffert became a teacher, worked as a high school principal in Breslau, was politically active, published several writings and died in Berlin in 1910. The Berlin church music director Kilian Nauhaus, a great-great-grandson of Franz Meffert, will tell about the family friendship between Mefferts and Jahns and draw a life picture of his ancestor Franz Meffert on the basis of letters and documents that are in the surviving family possession. The Freyburg gambist Thomas Fritzsch, cultural ambassador of the city of Köthen and special ambassador of the Burgenlandkreis, with whom Kilian Nauhaus has a long-standing musical collaboration, will provide the musical framework for the evening.

Franz Meffert's contemporaries had the following inscription placed on his grave in Jena, which is still preserved today: "He did right and spared no one". This is the motto of our evening, with which we want to commemorate this striking figure from Jahn's circle.

Held in the Freyburg church of St. Mary. 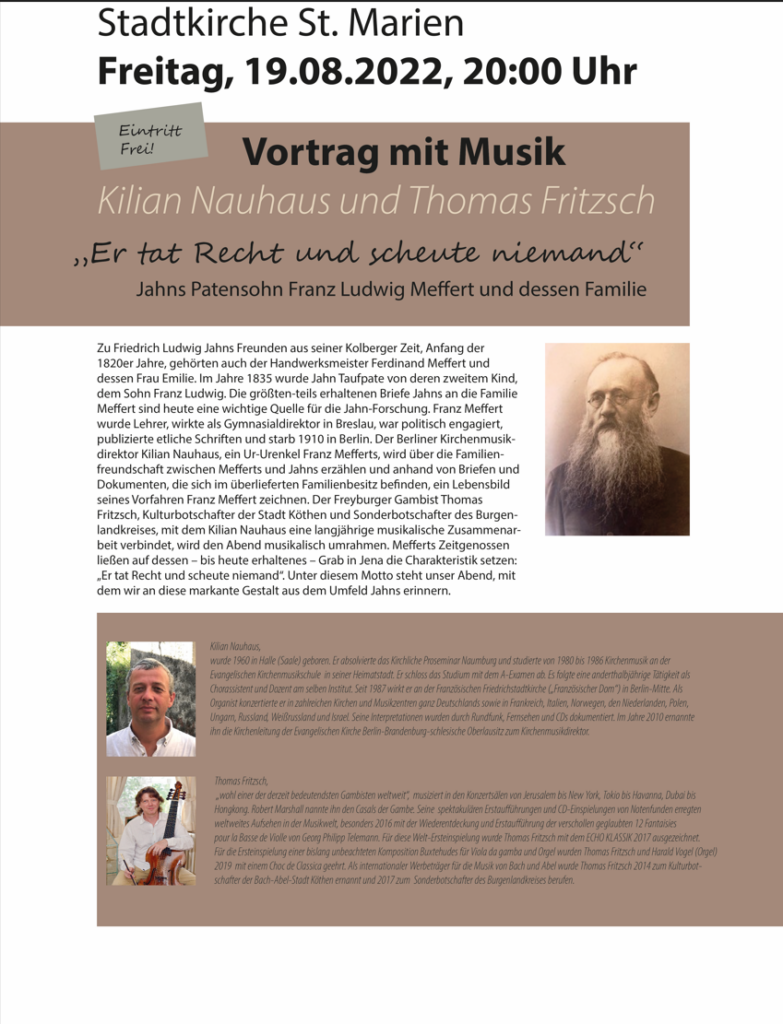 Sound views of life of the tomcat Murr