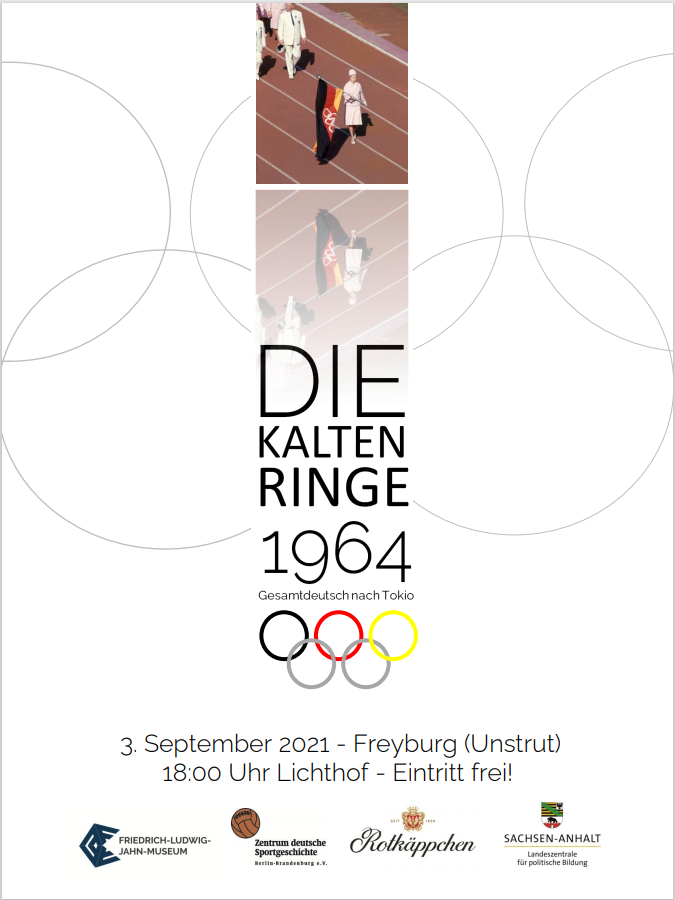 In 2021, the Summer Olympics will be held in Tokyo for the first time since 1964.  On the occasion of this not only sportive but also medial major event and the fact that this year also the 60th anniversary of the building of the Berlin Wall in Germany. the Friedrich-Ludwig-Jahn-Museum together with the Centre for German Sports History and in cooperation with the Rotkäppchen-Mumm sparkling wine cellar and the State Agency for Civic Education Saxony-Anhalt, on September 09, 2021, under the title "The Cold Rings -1964 All-German to Tokyo", a theme evening, in the atrium of the Rotkäppchen sparkling wine cellar Freyburg. Together with former athletes of the German-German Olympic team of 1964, the visitors first watch the documentary film "The Cold Rings" and then have the opportunity to exchange views with contemporary witnesses during a panel discussion..

The documentary film "The Cold Rings" is intended to commemorate the special, Germany's divided history. As good as lost in the memory of society is the fact that for the 1964 Games in Tokyo an all-German team had to compete for the last time. Already in 1956 and 1960, the Germans in East and West had to form a joint team under duress from the IOC. IOC President Avery Brundage had the vision that political borders could be overcome with the power of sport. But with the building of the Berlin Wall in 1961, the reality of the Cold War caught up with previous Olympic practices. Three years after the construction of the Wall, inner-German sporting relations had almost come to a complete standstill by 1964. The renewed formation of an all-German team seemed impossible. Against the will of the two German states, elimination matches had to take place in East and West. The political players were manifold; the Federal Government and the Central Committee of the SED were involved. Sport became a plaything of politics. There were arguments about flags, jerseys and anthems, about the competition venue in West Berlin or about GDR athletes who had fled and now wanted to take part in the competitions wearing the jersey of the Federal Republic. The composition of the Olympic team alone became a political issue. The political division of Germany was now also more than visible in sport.

The film project "The Cold Rings" brings an exciting piece of history from the age of the East-West conflict and German division back into the discussion about sports and politics. Until now, there has been no film documentary on this topic and only a few journalistic publications. Therefore, the sports historian Dr. Rene Wiese and the documentary filmmaker Thomas Grimm have joined forces to create the first cinematic reappraisal of the last joint German Olympic teams.

It is advisable to register as soon as possible, as only a limited number of participants will be admitted due to the implementation of the hygiene concept.